The first approval of a gene therapy for congenital disease in the US (Luxturna) inaugurates a new – though long anticipated – era for therapeutics. Along with questions around durability of response and long-term safety, pricing and reimbursement is a particular challenge. At $850,000, the price of Luxturna is nominally higher than other high-cost specialty medicines. However, as a one-time cost with a multi-year benefit, the cost per year of efficacy is far lower.

This is not a new challenge for the industry: Hepatitis C antiviral therapies such as Sovaldi and Harvoni offered a similar proposition. While a number of studies demonstrated their cost-effectiveness, compressing what were typically long-term costs of care into a single year hit US payers’ bottom-lines hard ($12 billion in expenditures at its peak). With other million-dollar gene therapy products on the horizon, there may be a concern that we are entering an era where standard drug pricing approaches will no longer be feasible. To answer that question, we explored whether the coming wave of gene therapies could create an even more challenging peak of one-time payments than those for Hepatitis C. In our base case, we find that gene therapy expenditures in the US are expected to reach $7.5 billion by 2025. Even in a bullish case, the rise should be more gradual than was seen with Hepatitis C costs (Figure 1). 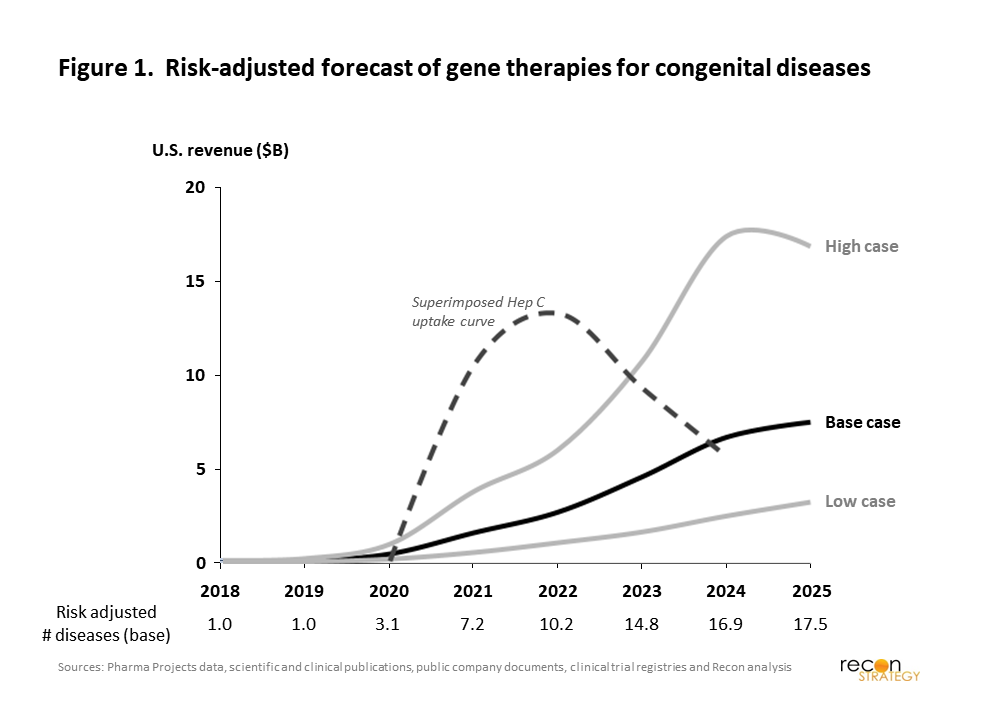 To construct this forecast, we analyzed all industry-sponsored, clinical-stage gene therapy drugs targeting congenital disease: this yielded 61 gene therapies for 38 distinct genetic diseases. For each drug, we estimated commercial potential based on publicly available incidence and prevalence data, and adjusted for the proportion of patients clinically suitable for treatment. Launch dates were estimated based on the current stage development and projected remaining timelines for each drug. Other key commercial and R&D assumptions include the ultimate penetration of backlog and incident cases, the ramp time to the terminal penetration, the price per treatment, and the probability of technical success given the stage of clinical development. Commercial assumptions took into account the gravity of the disease as well as the existence and nature of other treatment options.

For each drug, the revenue model was split into the backlog of untreated but treatable patients, i.e. prevalence, and the ongoing steady state of new patients, i.e. incidence. As shown in our illustrative example in Figure 2, this leads to a bolus in the first several years as existing patients are treated, with a subsequent stream of revenues from newly diagnosed patients annually. Our base case analysis in Figure 1 shows a low level of expenditure until 2021, with US revenues nearing $5B annually in 2023. The gene therapies that are the largest contributor to total expenditures were those substituting for existing drugs (blood factor and enzyme replacement therapies) or targeting ophthalmic disease. Compared to the five-year window following Sovaldi’s launch, the new Hepatitis C drug revenues peaked more quickly and at higher revenue levels than our base case for gene therapies. The high case scenario, which assumes higher than expected rates of technical and commercial success, does suggest that there is a possibility for gene therapy costs to exceed the Hepatitis C comparator but still with a slower ramp that would allow time for payer adjustment to this new therapy class.

Overall, the analysis suggests that gene therapies for congenital disease are unlikely to create an unprecedented short-term crush of one-time payments between now and 2025. Technical success across the pipeline of products isn’t fully independent of course, so if products late in the pipeline are successful at a higher than expected rates over the next few years, it could portend higher than Hepatitis C-like level of spend and greater pressure on the healthcare system. Similar pressure could also arise from other one-time treatments, such as gene therapies for non-congenital diseases (e.g. cancer) and stem cell therapies. But barring unexpected R&D and commercial success, the associated cost from treating congenital disease with these new therapies are unlikely to force a change in how these products are reimbursed on its own. That should not preclude the ongoing exploration of alternative payment models, such as the potential partnership between Spark Therapeutics and ExpressScripts PCS, as longer reimbursement intervals may better align against concerns on response duration or enable better perspective on value when compared to chronic therapies.