Twenty-two months ago, the competitive dynamics of Pennsylvania’s Capital Region were upended: UPMC rolled into the market, acquired the Pinnacle system, added four other hospitals, and promised $1.5B in upgrades and physician recruiting. The local quaternary powerhouse, Penn State Health (PSH), found itself under siege by a ring of community hospitals loyal to a new, distant academic center.  Four months later, Highmark and PSH affiliated, with Highmark getting seats on the board and, together, committing $1B to build out a community delivery system with Penn State Hershey Medical Center as the crown[1] (For more background, see my previous note here).

All that money is starting to go to work. WellSpan, the major local independent system, sits south of PSH’s current footprint but square in UPMC Pinnacle crosshairs.  There are overlaps in York (WellSpan York vs. Pinnacle Memorial), Hannover (Pinnacle Hanover vs. WellSpan Gettysburg) and in the northern outskirts of Lancaster (Pinnacle Lititz, WellSpan Ephrata).  By moving forward with the replacement of Memorial hospital at a new site and acquiring practices in York, UPMC is applying competitive pressure to WellSpan[2].

Massive spending on delivery capacity is not the only disruption.  Both UPMC and Highmark compete through vertical integration — the coupling of insurance coverage with a network of affiliated providers.  Upgrading delivery capacity threatens not only other providers but also other health plans.  Thus, Capital Blue Cross (CBC)[3], the major insurer focused on the region, risks getting caught in the crossfire as the UPMC/Highmark clash reshapes their market.

How have the locals responded?  In many senses, they have responded “in kind.”

WellSpan has begun building up capabilities and access points across its market.  Since 2018, WellSpan has either opened or put construction into motion on:

That’s a lot over a short period of time for set of finances already stretched by a costly EMR implementation.  But WellSpan was not done.

In June 2018, WellSpan affiliated with Summit, a small 2-hospital system to the west of the WellSpan center of gravity.  The move offered two advantages to WellSpan: Second, Summit’s two hospitals – 240 beds in Chambersburg and 64 beds in Waynesboro – sit an hour southwest of Harrisburg along I-81 (where UPMC and PSH have flagships), and 90 minutes west of York along US-30/PA-234 (where WellSpan has its flagship).  Scooping up Summit will solidify referrals that could be managed at York and create a bargaining chip of sorts for clinical collaborations with PSH.

For 2019 and perhaps the long-term, WellSpan seems to have softly aligned with Highmark:  its facilities are in the first tier of Highmark’s 2019 network (along with PSH facilities) while UPMC is in second tier.  UPMC Health Plans’ premium network makes no mention of WellSpan or PSH at all.

Soft alignments preserve flexibility but are a rickety platform for strategy: few resources, no commitments.  WellSpan’s reluctance to join up with Highmark/PSH is understandable.  Highmark is playing a game across all of Pennsylvania, the Mid-Atlantic even; the Capital Region is, at best, one secondary theater. As a part of Highmark, WellSpan would not have much influence to guide the strategy to the particular benefit of its local stakeholders.  But competing vs. UPMC-grade vertical integration is hard to do by half measure.  What to do?

A few weeks ago, WellSpan and CBC announced an alliance focused on new products for employers and Medicare eligibles, collaboration on value-based care (optimized site of service, reimbursement), and innovation (data, analytics, digital).  The alliance will forge capabilities to compete vertically and perhaps create an option for a fuller integration when competitive dynamics demand.

CBC shares WellSpan’s commitment to the Capital Region community.  But is it all the partner WellSpan would hope for?

Perhaps not.  Let’s look at its recent business performance.

The health plan’s finances are not well publicized, but we assembled an aggregate out of the NAIC filings of subsidiary entities with medical members[5].

Assuming this aggregate is representative, CBC appears to be a classic commercial PPO player but not a very good one.  It lost money in 2016 and 2017.  The profit it made in 2018 seems mostly a result of purging its PPO book of bad risk and/or significantly raising prices and enjoying a short term margin lift before most customers could fully react: the overall premium revenue in commercial fell nearly 9% as the net underwriting margins shifted from 60 bp loss in 2017 to a 7.9% gain in 2018[6]. 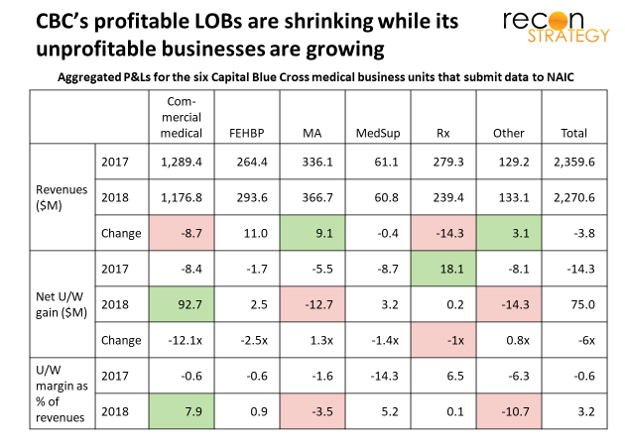 Further, CBC’s track record in HMO and Medicare Advantage – more relevant than PPO to vertical competition — is ambiguous at best: the commercial HMO (Keystone) lost money (net U/W margin going from -4% to -16% between 2017 and 2018).  And, while CBC did make money on its Keystone Medicare business, it lost money on its Capital Insurance and Vibra Medicare businesses, dragging the overall line of business margin to a serious loss.

It looks like CBC brings the wrong skill set to a vertical fight (CBC has a 200-employee subsidiary dedicated to supporting value-based care – Geneia-  but its track record with CBC’s book does not create confidence[7])  No wonder CBC is willing to strike a deal with WellSpan.  But does WellSpan have the answers?

The search for care management capabilities

WellSpan has been dipping its toes into accountable care.  It manages 5,700 MA lives for Geisinger.  Its small group product with AET has only 400 lives.  Presumably there is a value-based arrangement with CBC with unknown performance (but apparently not helping CBC’s bottom line materially).  The best public benchmark is the CMS MSSP in which WellSpan has participated since 2015 but has yet to earn a bonus[8].

WellSpan and CBC might build state of the art care management from their internal rudiments.  But that will take time, resources and a lot of learning by doing, hampering business along the way.  WellSpan and CBC might find a partner to help them.  But vertical strategies are very hard to do by halves, let alone by outsourcing: they involve a restructuring and integration of processes, mindsets and incentives.  Vendors can help with pieces, but who will bring it all together, push through the inevitable resistance?

With the deal, WellSpan and CBC may think they have bought themselves some time.  In the near-term, WellSpan can try fending off the UPMC CapEx onslaught with new cardiovascular labs, surgical robots, clinics.  And, for now, they can count on a friendly Highmark/PSH.  They share a fiercely aggressive competitor and Highmark is willing to operate in coalitions.  Pretty soon, however, WellSpan and CBC will need that compelling care management capability and value care discipline.  Otherwise, all those investments will just end up adding fixed costs.  Highmark/PSH’s friendliness won’t extend to paying overly generous rates to absorb a lot of stranded assets.

Vertical combinations are competitively destabilizing.  As this strategy spreads to new markets, incumbents will find themselves pushed to defensively replicate.  Further, because vertical competitors can be just one or two acquisitions away, incumbents waiting until the vertical enters their market will have to scramble for partners and may not find what they need from what’s available.

Those who “half replicate” a vertical combination by strategic alliance may appear prudent — vertical HMOs are not everyone’s preference[9].   But the cost performance of vertical combinations can be hard to match. Vertical competition requires both capital to “take and hold” territory and painful change to manage the differing business cultures and the complex incentives.  Alliances may not be enough.

If they stick to an alliance, WellSpan and CBC may find themselves holding on to a thinner and thinner slice of PPO lives if UPMC or Highmark/PSH bring to market the kind of compelling HMO value propositions of which vertical models are capable. Ultimately, the Capital Region may only be big enough for two vertically integrated delivery systems, not the three that it has.

[1] Earlier this month, PSH was granted the ability to go direct to the capital markets to raise money — formerly it had to persuade university to go to the bond markets on its behalf – easing the path to fulfilling the commitment.

[2] On the other hand, UPMC has shied away from competing with Penn Medicine and shut down its small hospital in Lancaster (which competed with Lancaster General affiliated with Penn Medicine). The hospital was small (~$100M in revenues) and had a margin of -12.6% in 2018 and, in any case, it is unlikely patients would drive up to Harrisburg for tertiary care vs. driving into Philadelphia.  Perhaps UPMC also wants to keep options open with Penn Medicine and an olive branch of this sort helps to do that.

[3] Capital Blue Cross is an independent plan but shares a 21-county service area with Highmark that operates under the Blue Shield brand in the overlapping region.  Highmark tried – and failed – to persuade Capital Blue Cross to merge in 2001, leading subsequently to a dissolution of their partnership.

[4] Wellspan saw its operating income from a gain of $125M in 2015 to a loss of $19M in 2018 and blamed the decline on an expensive EMR implementation.  Before the Summit merger, bond rating agencies changed their outlook for WellSpan to negative citing the competitive market fluidity.  Since the combination, the rating agencies have not changed their assessment (still at Aa3 and negative outlook), but their concerns have shifted to integration risk – something a bit more clearly in WellSpan’s control.

Summit will be transitioned to Epic over the next two years which will create some drag.

[6] The Rx business seems to be one year further along: it enjoyed a 6.5% net U/W margin in 2017 but saw revenues decline by 14% in 2018 and margins fall to zero (the medical loss ratio stayed the same, the profits appear to have evaporated due to admin and other operating costs).

[7] It did cut a deal recently with direct to employer primary care provider Paladina but does not seem to have a lot of other business.  Before that though, most public references date from 2017 in a health plan deal with Excellus.

[9] California experience demonstrates that a large portion of the market does not want a Kaiser model no matter how strong the brand, dense the network, extensive the base of enthusiastic customers.  An alliance may be better positioned to play both sides of the market (though neither necessarily well).