Who will be the first to take integrated health care delivery national?

A few years ago, the best bet might have been an established provider with a nationally compelling brand and a growing affiliate federation such as Cleveland Clinic or Mayo. Instead, Optum – just a decade ago three separate services largely focused on serving United’s health benefits business – has entered care delivery and — by a constant stream of acquisitions big and small — built up beachheads in a majority of markets and is – via ongoing big acquisitions, tuck-ins and greenfield expansions – laying the foundations of a national integrated ambulatory system.

Particularly in light of the latest rumors about the role of clinics in driving the value of a potential AET-CVS combination, it is timely to take a look at what Optum has put together, size its geographic reach and discuss some strategic implications.

Optum has been active in practice and IPA acquisition since at least 2010 (first major care delivery focused acquisition was AppleCare Medical Group and Memorial Healthcare IPA in Orange County) and has owned practices since at least 2008 (the Las Vegas group Southwest Medical acquired as part of UnitedHealth’s acquisition of Sierra Health). Over time, Optum has built up a large clinical presence via a few avenues: Acquisitions have been supplemented by investment by organic growth within these practice units (for example, OptumCare of AZ moving into Tucson, WellMed moving into Dallas) or tuck-in acquisitions (e.g. Wellmed buying USMD). At this point, Optum reports having 20K affiliated physicians.

This relatively slow and steady practice acquisition strategy over the last 7 years has been paired with a “big bang” expansion in urgent care and entry into ASCs driven by two major recent acquisitions:

Value of OptumCare
In our view, there are five or so major potential synergies across OptumCare components (to the extent they are operating in the same geography) and between OptumCare and UnitedHealth’s health plan business: 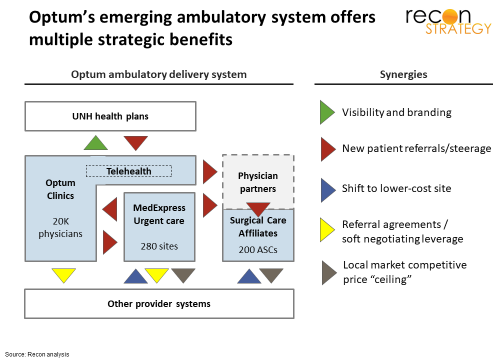 Here’s a quick description of each:

Geographic penetration
As a national insurance player, United will reap more power the more geographies in which OptumCare operates. Given the synergies across components, OptumCare’s impact is stronger if all three components – clinics, urgent care centers and ASC’s – are concentrated in a particular market. This is a classic breadth vs. depth challenge which United has been addressing with the steady acquisition and growth in practices and IPAs coupled with “big bang” acquisitions of geographically dispersed MedExpress and Surgical Care Affiliates chains. How far have they gotten?

We mapped out the clinics identified as part of an Optum acquired practice or IPA, MedExpress or Optum-branded urgent care centers and Surgical Care Affiliates sites (naturally there is some judgement involved in classifying practice and we may not have captured the most recent urgent care center builds or closures).  We then identified how many regions had one type of care, two types of care or three types of care and weighted by population and, weighting those regions by population, identified the total share of population with access to OptumCare (we did not weight by number of clinic or urgent care or ASC sites per region). In the exhibit below, we used Hospital Referral Regions which are aggregates of the 3,500 or so Hospital Service Districts where patients are referred for tertiary services as best capturing the opportunity for OptumCare to be working with multiple hospitals. The geographic reach Optum has achieved in seven years is remarkable and, if Optum maintains its recent pace of investing (e.g. buying a 300 physician practice in Carmel Indiana in April 2017 for $184M or doubling the size of the MedExpress urgent care site network since its acquisition in 2015), the platform can quickly become ubiquitous.