An innovative sales strategy for a pivotal drug; Novartis trailblazes with Leqvio

After the $9.7B acquisition of The Medicines Company two and a half years ago, Novartis is eager to demonstrate value with a successful launch of the primary target of the deal, Leqvio. This launch is also a key catalyst for new revenue generation at Novartis, due to a $9B patent cliff by 2026. Given the high-stakes nature of Leqvio’s launch, the decision of the Swiss pharma to employ a non-traditional sales strategy in several key countries, including US and England, is noteworthy.

Leqvio is an siRNA inhibiting the expression of PCSK9, which is also the target of commercially underperforming monoclonal antibodies launched 7 years ago: Repatha from Amgen, Praluent from Regeneron. Those treatments were also approved for cardiovascular disease, but faced significant resistance from payers at launch, particularly given $14,000[1] initial annual price points that have since been reduced by half.

After seeing Praluent and Repatha enter an 8th year of combined sales below $2B, despite pre-launch peak sales estimates exceeding $9B for both[2], one could have expected Novartis to simply avoid previous PCSK9 pricing errors (Novartis’ $6,500 annual price is comparable to the now-reduced competitors’ price) while sticking to the tried-and-true sales approach, but the pharmaco opted to trailblaze instead. Most notably, Novartis is deploying thousands fewer sales reps[3] than would be typical for a launch with commercial expectations north of $2B.

What motivated Novartis to deviate from this traditional approach, that typically drives maximum sales, for Leqvio’s launch, and will other drug developers soon follow suit?

Following FDA approval of Leqvio in late 2021, Novartis has launched their new drug by partnering with large health systems; specifically targeting 200 systems with the majority of heart disease diagnoses and prescription volume in the US; instead of primarily targeting physicians.

This strategy is driven by a handful of key factors. One is the relatively idiosyncratic consolidation of cardiologists in the recent past, with over 85% now employed by health systems[4], as noted by Novartis in their 2021 cardiovascular update (Exhibit 1). 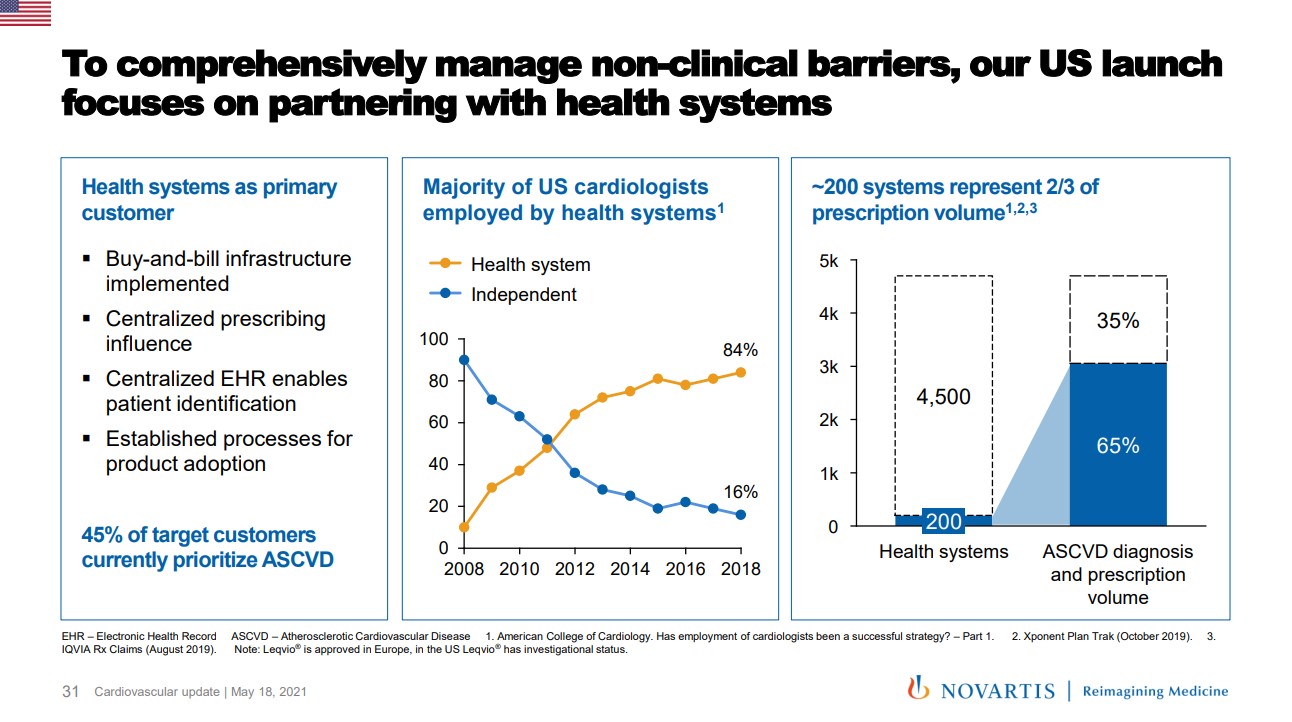 Novartis is able to work directly with systems, akin to key accounts, to reach a critical mass of these specialists, thereby reducing their salesforce by thousands of reps and lowering costs considerably compared to traditional launches.

But perhaps the most noteworthy motivation for going direct to systems is Leqvio’s placement on medical benefit formularies as a provider-administered drug, which typically confers buy-and-bill reimbursement for US health systems. This distinguishes Leqvio from its PCSK9 competition, and was a core part of Novartis’ message to investors in their 2021 presentation (Exhibit 2). Buy-and-bill offers health systems a generous profit margin from their direct acquisition of drugs, generally 6% of a treatment’s average selling price (not factoring in potential profit from 340B drug purchases), on top of reimbursement for office administration.

Another driver of these health system partnerships is the concern of restrictions from commercial insurers, where Novartis is now allied with large providers to enable patient access to Leqvio. A number of payers have begun putting prior authorization requirements in place as they previously did with Repatha and Praluent, though it remains to be seen if these health systems will be well-positioned to navigate around them.

Finally, these collaborations with health systems are expected to generate long-term safety and outcomes data, potentially expediting a ramp-up of Leqvio sales if results do pan out.

With NICE backing in September 2021, Novartis formed an agreement with the NHS in England to make Leqvio available to a broader patient population than in the restrictive guidelines that limited Praluent and Repatha.

The launch of both PCSK9 monoclonal antibodies in 2015 was initially marred by a NICE decision declining reimbursement.[5] Eventual approval returned a Pyrrhic victory for Amgen and Regeneron due to a discounted NHS price and conservative NICE guidance for their drugs. Consequently, across the NHS, only 216 prescriptions for Praluent and Repatha were dispensed in 2021 compared to over 2 million scripts for ezetimibe, a commonly prescribed drug for uncontrolled cholesterol.[6]

While Leqvio was approved with already less restrictive provider guidelines, it also earned the first (and only) place on Part VIIIC of the NHS formulary under its innovative NHS agreement. Exact financial terms are confidential, but example formats under the utilized NHS Commercial Medicines Framework include price/volume, cost sharing and outcomes-based reimbursement.

What is known is that the deal enables Leqvio prescriptions through “protocolization” as well as provider education and proactive patient identification. Novartis and the NHS got a head start on troubleshooting the rollout by launching the SPIRIT clinical trial in 2021, which aims to recruit 900 patients across England and study how to speed up adoption of Leqvio in primary care settings.

In the actual agreement, population health tools will be used to identify at-risk patients with a goal of providing access to Leqvio for 300,000 patients by 2024. Presumably, these same tools will capture patient outcomes to measure performance of Leqvio. This protocolization creates a more scalable system of Leqvio delivery, enabling shorter time to impact (and greater sales for Novartis) if long-term outcomes results are in line with expectations.

Mimicry of Novartis’ strategy is unlikely until another “perfect storm” emerges

One specific factor does not explain why Novartis, part of an industry that typically implements tried-and-true commercial tactics, embarked on an unproven sales strategy. In the US, a confluence of factors relevant to Leqvio created this opportunity:

One can point to examples with one of those criteria, but a combination of all is less common. Yet continuing consolidation of US healthcare providers increases the probability of a drug entering a similar situation in the future.

In the UK, a set of different factors was most relevant, given a drug with unproven long-term outcomes following peers that were meaningfully restricted by NICE, and most importantly, a company willing to go under the microscope of a value-based agreement. The most limiting prerequisites for a similar population health agreement in the future would be 1) enough healthcare dollars at stake for both the NHS and a drug developer to commit to infrastructure development and 2) pharma confidence in drug performance amidst considerable uncertainty in long-term outcomes.

As the Leqvio story plays out, it will surely be noted by Novartis’ peers, especially if the outcome is a clear success or a resounding failure. There will likely be other drugs entering into similar circumstances in the future, so pharma leaders will be watching this innovative approach closely, as Novartis seeks to meet or exceed the already substantial expectations for Leqvio.